Things you can do right now to help stop human trafficking

Since it's inception, The Salvation Army has been fighting human trafficking and continues this work today. Human trafficking or modern slavery exists and is happening in our own Territory - but there are simple things you can do to help stop it.

The Salvation Army has been fighting human trafficking since its inception. In the late-1800s, the Army famously led a 'sting operation' to uncover under-age prostitution in the UK and as a result was instrumental in raising the age of consent from 13-16.

The Army was also responsible for changing an entire industry, when it began its own match factory. It used safe materials rather than the poisonous phosphorus and offered fair wages. This led to the entire match industry changing and becoming safer for people working in its factories.

Today, this work continues around the world in the Army's 'Fight for Freedom' framework, both to assist people vulnerable to human trafficking, as well as advocating for systemic change. Just a few examples of the work that has happened over the past year include:

This is just one of the thousands of stories from people who have discovered that their lives matter and are important:

In USA Western Territory, Lori, a survivor of servile marriage, along with her son, has been a resident at Orange County’s Anti-Trafficking Guest House for six years. They entered the programme from out of state and were in several shelters before coming to us. Lori was trafficked by her family who have been actively looking for her and have threatened her with death. These threats are very real. Since Lori’s family has access to all her identifying information, her best chance of living a safe life was by changing her name and her Social Security Number (SSN). This turned out to be a daunting, difficult and emotional process. With help of their legal partners at the Public Law Center, Lori was able to change her and her son’s name through court after three years. The process of obtaining an SSN took several years with multiple denials. However, after three years of hard work, Lori and her son received new SSNs. Lori can now live and work freely and use her ID without fear of being killed.

What about our Territory?

Human trafficking  happens in our Territory, with an estimated 3000 people in modern slavery. New Zealand is a destination country, and under the guise of immigration, people have been trafficked into the agriculture, fishing, construction, and hospitality industries. They are often stripped of their passports, forced to work long hours for little or no pay, and kept in appalling conditions.

Here's some reported examples that have happened right here in Aotearoa:

The first conviction for human trafficking in New Zealand was made in 2017, when Raroz Ali, a Fijian national with New Zealand residency, set himself up as a family business and ran an advert in Fiji selling a dream: working in God’s Own Country and earning seven times what they could at home.

‘They paid a lot of money upfront for food and accommodation, but once they arrived in New Zealand they were put to work [in Ali’s construction business and picking fruit in the Bay of Plenty] for little or nothing at all. They were forced to sleep in one room with no bedding—men and women together,’ says Rebecca Miller, who led the operation through the Ministry of Business and Innovation. ‘It wasn’t until they were given the opportunity to go to church that it came to the surface.’

A church member struck up a conversation with one of the Fijian workers, and the story started to unfold. Sensing that something was amiss, the member had the tenacity to contact their MP, who then reached out to Immigration New Zealand. It took 2 years and around 6000 hours to build the case against Ali, who was convicted of 15 counts of human trafficking and sentenced to nine years, six months in jail.

This is a horrifying story, but it also shows the power of just one person who was brave enough to ask questions.

Take our 'Commit to 5' Challenge:

You may be surprised at how small, simple actions can ripple out to make great change! We're encouraging everyone in our Territory to commit to making 5 simple changes over the next year.

Here are 10 things you can do right now to help stop human trafficking:

Share: Talk about what you have learnt with friends, family, at your school, in your church or workplace. Share articles online.

Teach: Teach young children about the techniques used by traffickers—especially on the internet and in malls.

Report: If you see anything that doesn’t seem right, report it to the police—such as an underage girl selling sex on the street, a domestic worker who is not allowed to leave the home, labourers kept together and working extreme hours, a teenage girl with a much older ‘boyfriend’.

Encourage: Lobby our government to review existing laws and procedures on human trafficking. Write to your MP in support of new legislation that will create greater transparency in our supply chains. Encourage news media to cover the issue of slavery. Encourage your local school to cover the topic. Encourage police to identify and respond to the issue.

Think about what you buy: Go online and see if the companies you buy from have codes of conduct or policies to address human trafficking. Congratulate those that do, and politely encourage those that don’t. Support the companies that are taking the issue seriously. Use these guides to help you shop for fashion and food ethically.

Give: Donate to a human trafficking programme. Hold a fundraising event.

Volunteer: Donate your time or expertise to an organisation fighting slavery—either in your local region, or further afield via the internet.

Use your talents: If you are a writer, write a blog. If you are a painter, paint a picture. If you do sports, use it as a platform to raise awareness. If you are musical, write a song. If you like movies, post a short film.

Commit: Commit to doing five actions per year (even more if you are up for it) that will contribute to the fight against slavery. 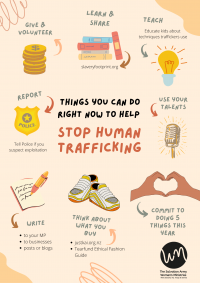 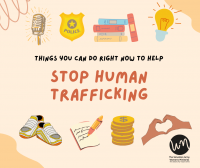 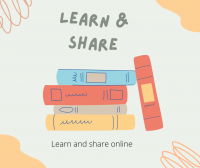 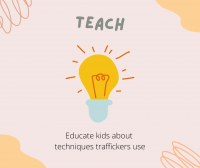 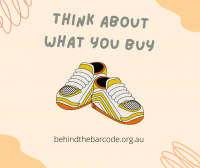 Think about what you buy 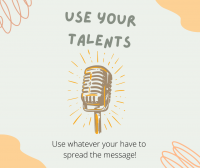 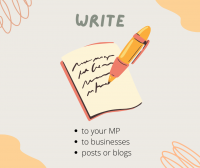 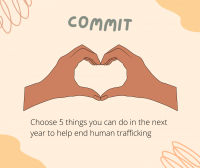