More than Conquerors is a collection of 23 Bible studies developed by women from different parts of our Salvation Army world. Unlike previous collections, Let Justice Roll and Time to be Holy, the 2022 studies are written exclusively by women under 40-years-old, providing an intentional platform for younger voices.

"Being 'more than conquerors' is not about pulling ourselves up by the bootstraps and trying harder, neither is it about coming up with the right plan to make something happen. It is not about us at all!"

This includes a study written by our own Cadet Rebecca Moffat (previously Howan), who wrote about 'fighting lies with truth', based on John 8:31-32:

'It can take courage and boldness to dare to cast aside the enemy’s lies, which often play on our insecurities and fears, and instead believe what God says about us – particularly if we’ve believed those lies for a while. But when our identity in God is firm and secure, when we believe and claim that the things God says about us are true, everything can change. Chains can be broken, lives can be transformed and strong warriors for God’s Kingdom can be birthed, bringing God’s life, joy and hope into this world,' she says.

The Bible study is based on the words of these powerful verses, in Romans 8:35-39:

"Who shall separate us from the love of Christ? Shall trouble or hardship or persecution or famine or nakedness or danger or sword? As it is written:

“For your sake we face death all day long;
we are considered as sheep to be slaughtered.”

No, in all these things we are more than conquerors through him who loved us. For I am convinced that neither death nor life, neither angels nor demons, neither the present nor the future, nor any powers, neither height nor depth, nor anything else in all creation, will be able to separate us from the love of God that is in Christ Jesus our Lord."

Being 'more than conquerors' is not about pulling ourselves up by the bootstraps and trying harder, neither is it about coming up with the right plan to make something happen. It is not about us at all! Paul declares in Romans 8:37 that we are 'more than conquerors through him who loved us'. Being 'more than conquerors' is recognising Jesus is with us even in the grit of the battle and that it is only with his help that we pull through and keep pressing on. Jesus is true to his promises as he lifts our heads and helps us see beyond the giants, the obstacles and the trials that loom before us.

Yes and amen! Dig deeper into God's Word by downloading the study below.

Why not get together with a small group, and journey through the studies together - it's a celebration of women, the younger generation of our Army, and most of all, God's everlasting Word. 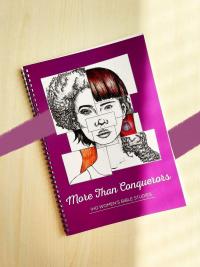 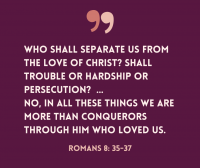 Share the study on your social media with the words of Romans 8: